Robin Gibb: He ‘Started a Joke,’ and Left Us in Tears

By Chris Willman | Stop The Presses! – 1 hour 9 minutes ago
Did a singer's name ever seem so prophetic and appropriate as in the case of Robin, one of the great male songbirds of rock's golden age? Bee Gee Robin Gibb succumbed to a longtime struggle with liver cancer Sunday, a spokesperson confirmed. The Rock & Roll Hall of Famer was 62. 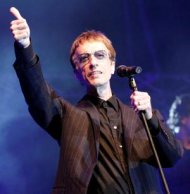 (photo: Frank Hoensch / Getty Images)His death dashed the hopes of Bee Gees fans who'd hoped that a miracle was in store after the  singer emerged from a coma late last month. Prior to his regaining consciousness, his family had revealed that Gibb had been given only a 10 percent chance of surviving and seemed to be preparing the public for his imminent death. Despite the shock fans are now experiencing, family members surely feel grateful for the month they had with Gibb after his unexpected awakening.
Robin follows Maurice (a fellow Bee Gee) and Andy (a solo artist) in death, leaving eldest brother Barry as the sole survivor among the legendary Brothers Gibb. The Bee Gees had officially retired as a group in 2003, following Maurice's passing, although there'd been reports that the remaining two might revive the act as a duo, before Robin fell seriously ill.
Disco fans are feeling their mortality this weekend, as the death of one of the principal voices of the 15-times-platinum Saturday Night Fever soundtrack follows the passing of Donna Summer by a mere three days.
A statement read: "The family of Robin Gibb, of the Bee Gees, announce with great sadness that Robin passed away today following his long battle with cancer and intestinal surgery. The family have asked that their privacy is respected at this very difficult time."
Some of Robin's health problems in recent years seemed to echo the maladies suffered earlier by Maurice -- who was his twin. The cause of Maurice's death nine years ago was attributed to a twisted intestine; the family's statement refers to emergency gastro-intestinal surgery Robin underwent in August 2010. That condition was said to be unrelated to the liver cancer that also overtook him.
Back in early February, Robin was giving interviews and describing reports of his dire health as exaggerated. "I was diagnosed with a growth in my colon," he told the BBC then. "It was removed. And I've been treated for that by a brilliant doctor, and in their words 'the results have been spectacular.'" The growth, he explained, "is almost gone and I feel fantastic. Really from now on, it's just what they could describe as a 'mopping-up' operation. I am very active and my sense of well-being is good."
Sadly, that appears to have been the last time Gibb spoke with the press. Fans knew the news couldn't be good when he was unable to attend the premiere of his first classical work, Titanic Requiem, in London on April 10. A few days after that work's bittersweet debut, family members revealed that he had contracted pneumonia and was "fighting for his life."
Then, his rallying over the last few weeks was reported as nothing short of a miracle. "Robin has confounded his doctors by waking up from the coma he had slipped into after contracting pneumonia," a statement on his website read. "He remains in intensive care but is now fully conscious, able to speak to his loved ones and breathing on his own with an oxygen mask."
Gibbs' wife, Dwina, told an Irish newspaper that the family had been playing music to help rouse her husband -- and that the newly conscious singer had cried upon hearing Roy Orbison's "Crying."
Although falsetto-wielding Barry was the most prominent and most-parodied Bee Gee in later years (see Justin Timberlake's comic impersonation on SNL), Robin was often considered the unofficial lead singer in the trio's late-'60s early days, and it was his tender vibrato that early fans first associated with the Brothers Gibb, via hits like "I Started a Joke" and "I've Gotta Get a Message to You."
It was Robin singing on the group's first No. 1 British hit, "Massachusetts," which also topped the charts in most of the territories of the world (except the U.S., where it made it to No. 11). He was a lad of 17 at the time.
Competition with Barry led Robin to quit the group and go solo in 1969, though he returned in 1971, in time to participate in "How Can You Mend a Broken Heart," their first No. 1 single in America. Their real renaissance, however, kicked off in 1975 when, in the earliest days of disco, they had a second No. 1 with "Jive Talkin'," followed by the similarly rhythmic "Nights on Broadway" and "You Should Be Dancing," which became the template for a block of Saturday Night Fever songs in 1978.
Fever revived "Jive' and "Dancing" along with introducing the instant dance-floor standards "Stayin' Alive," "Night Fever," "If I Can't Have You," and "More Than a Woman," plus a ballad in the more traditional Bee Gees vein, "How Deep is Your Love." It was by far their greatest commercial triumph, and also, in a way, their unmaking, since only pockets of critics and fans were inclined to recall the pop chops and cred of their early albums after they couldn't shake their association with the waning disco tide.